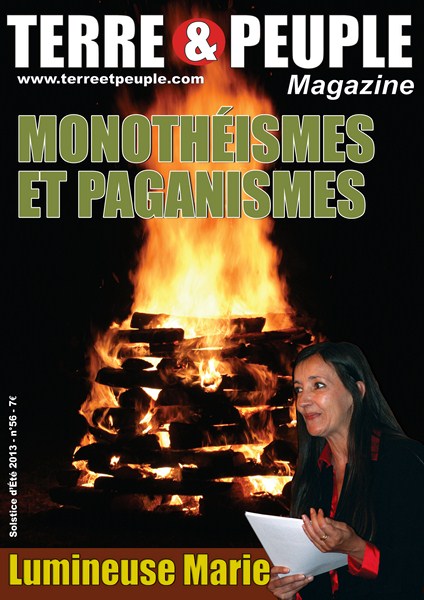 Greatness, dignity, haughty soul…. Words are missing to tell what a great man was Dominique Venner.

The rightful place in our memory is like no others. Several comments mentioned, about his death, Mishima, Montherland, Drieu and others. Yes, of course. However, Dominique Venner is even more. He represents the North Star for men and women who are looking for the right direction.

I feel the need to speak personally. As I am thinking of his icon, I know he is right beside me. This might make people of little faith smiling. Well, too bad. In my life, I’ve met a bunch of people who deserve to be famous (I erase the others from my memory). No one, never, has deserved to follow his footsteps. With unnecessary words, because he did not like pointless and superficial chat.

One day, in April 1958, I decided to follow his path. I’ve never had any other chiefs as him. I’ve never felt sorry for making this choice, although I was just a kid. This choice is, today, source of pride.

The life of Dominique Venner is similar to the one of a warrior and a thinker, a thoughtful knight who, over time, knew how to adapt his fight to the changing battlefield. Nevertheless, he never changed his path from the life he chose, which could be summarized in one word, loyalty.

During his life, the group ‘Jeune Nation’ was a time of youthful rebellion against intolerable betrayal. Many boys and girls from my generation have joined this group, which was composed of tougher veterans, such as my old friends Ferdinand Ferrand and others whose memory is dear to me. Is it necessary to tell that I always wanted to be loyal to our youth? This loyalty, that no one will judge less romantic (and why not?), is the product of a well-reasoned settling down of an understanding world, in which I am indebted, for the most part, to Dominique Venner. That is, he has opened new doors, towards new horizons, with his pamphlet that he wrote in jail after he got arrested for his action in the OAS as a dangerous activist. For those of you who have experienced this kind of things, the temptation was so great to give up, as the future seemed stuffy and unattractive. Reading ‘For a critical review’ (“Pour une critique positive”), we understand that a new fight has begun, and so we have decided to rally the troops. In this text, Dominique Venner was critical, without any concession but also with alacrity, the eminent people of the group called “national”, who didn’t understand anything and, for sure, haven’t gotten anything yet. Those are the people who, fifty years later, are still angry against Dominique Venner, because they haven’t forgiven him of being right. The most disgraceful act is to split on a dead man. They have shown they true personality: vile caretaker and, for most of them, mentally ill. Taking advantage of the forum offer by “Rivarol”, these ass-blessed, rancid, smelling mouldy and the old zealot who is neglecting herself vomited their venom.

Let’s be clear: from a Konopnicki who write chronicles (which seems to comes from sewers) in a newspaper called “Marianne”, from the pedantic narcissistic Michel Onfray, from the bitch Frigide Barjot, sub-marine of UMP, from the unscrupulous careerist Guillaume Peltier, who came from the FN, MNR, the pensioner, UMP; we don’t expect anything other than a torrent of hate: normal, they are doing exactly what they are getting paid for. However, disgraceful act is coming from those who are calling themselves “nationals” and with whom we have nothing in common. Those people are our enemies and we have to treat them like it (we have largely identified them and we are not the kind of people who practice forgiveness of sins). Innocent people who say that we have to join forces with them are forgetting something: at the first opportunity, they will do what they always wanted to do: they will shot us in the back (since they are not able to reawaken the woodshed of the Inquisition).

A special case is that of Pierre Sidos. He is well placed to know exactly under which conditions Dominique Venner was arrested during the OAS, he never forgave Dominique Venner of having enrolled the best people from the Group “Jeune Nation”, in the frame of re-creating the “Fédération des Etudiantes Nationalistes” and then “Europe Action”. Sidos stopped the clock in 1789. He belongs to those who want to resurrect Déroulède, protect the blue line of Vosges on behalf of a visceral germanophoby, destroys identities of fleshy nations (although they are calling themselves “antijacobins”….but they are not bothered by a contradiction). What they know is a ”single France”, a France, of course, “eldest daughter of the Church”, which could only survive if French people are going back to church…and girls are wearing mini-skirts.

The birth of ‘Europe-Action’ was a revolutionary act, by putting some old-fashioned things behind us toward antique museum. At first, it was a magazine, where in the first issue (January 1963), we could read a premonitory warning: “In the East as in the West, humans’ transformation into machines to produce and consume, standardized in their needs, their perceptions and behaviours, is already very advanced”. It was five years before 1968…The rift was already made: on one side, “the fat, greedy and spineless middles classes and on the other, people who have accepted to sacrifice everything although time is now pleasant, people who accepted to fight although everything tell you to give up, people who, hunted, show the future. These people have nothing to do with the past. They know that we don’t write History with a wing mirror. They describe themselves from their own standards. They are developing new solutions to bring to a new world. Time doesn’t count for them because a battle has to be long to be successful.

Making up the hope of a revolutionary renewal, at the European level, ‘Europe-Action’ has had a founding dimension that marked a whole generation of activists (although today, some of them have denied the heritage for reasons that I will not tell…because a pagan can practice charity).

How Dominique Venner chose to die, was immediately understood by his old friends. However, beyond the circle of the old guard, we must welcome the dignity of some comments that make him entirely justice. I would like to mentioned Bruno de Cessole (‘Valeurs actuelles’, May 30th, 2013): “It is not in despair at the decadence of his country, but to show that there is no historical inevitability, he has raised ethical issue. It’s not a taste of posture and egotism that this secret and reserve man, enemy of sham and disorder media hit, has accomplished his ‘Westerner’s Seppuku’ (form of Japanese ritual suicide by disembowelment, originally reserved to Samouraï), but by oblation and sacrifice spirit. Against the fate and programmed destruction of our customs, he chose voluntary death “to awaken the slumbering consciences”. In times of despair like today, where the values of heroism and sacrifice are seen as devalued old idols, this is incomprehensible to small anesthetized and brainwashed men of our time, who can’t admit that intellectual people choose to kill themselves in order to prove that freedom doesn’t include being slave of life, and encourage his comrades to revive with the destiny”.

The last letter written by Dominique Venner is, more than his legacy, it is a manifesto of life. His words seem like a call to stand up straight. We should remain dignified. And walk to the North Star. He is waiting for us. 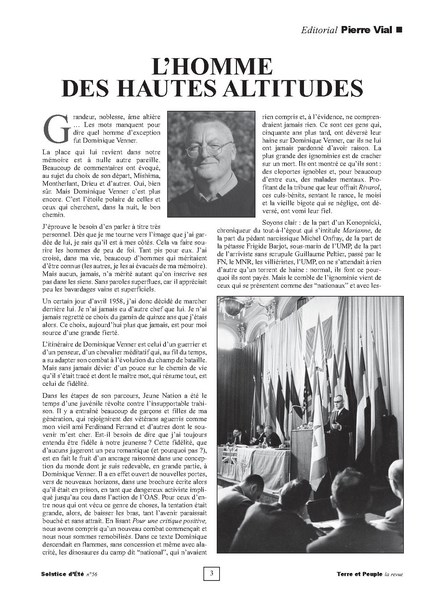 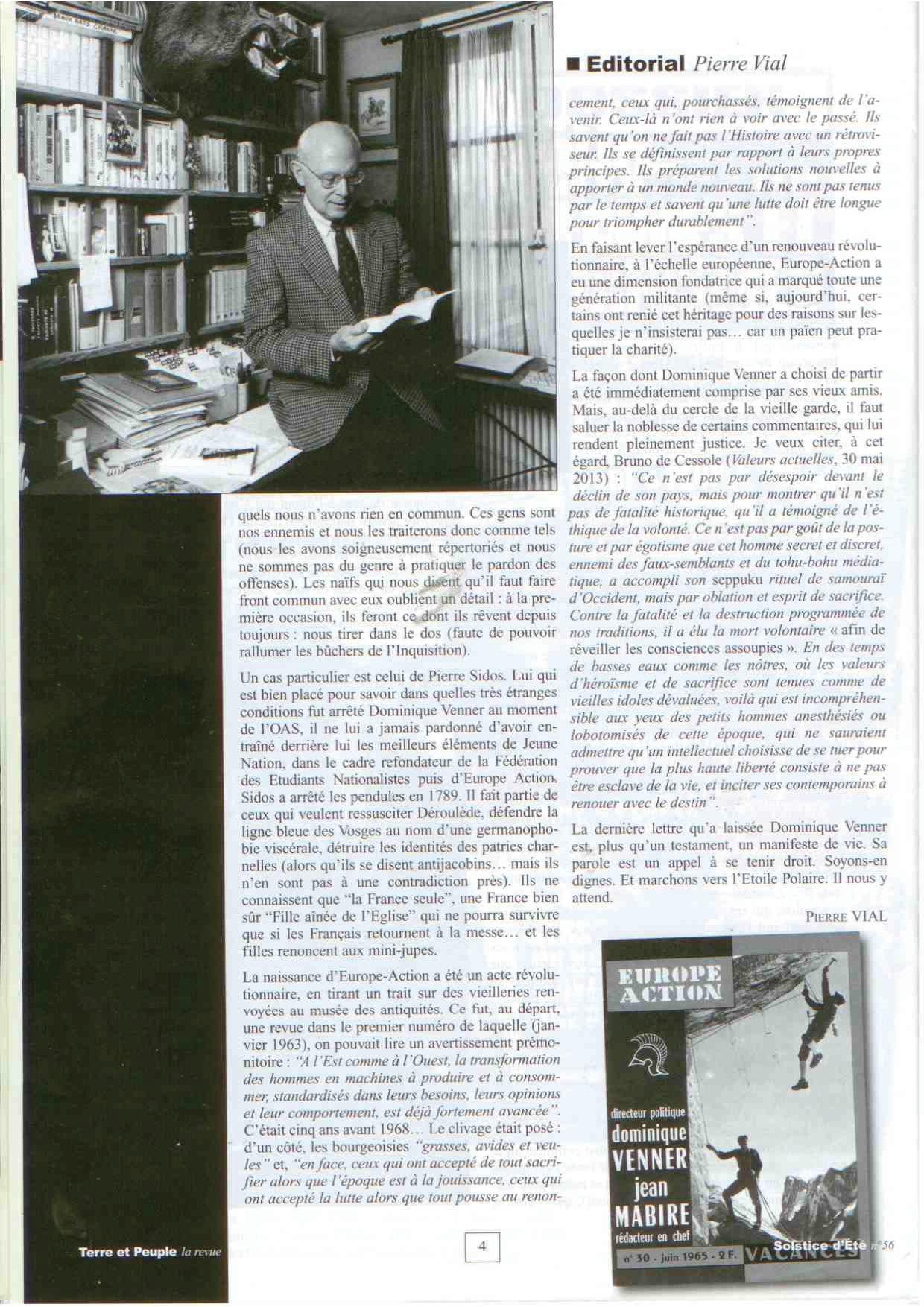