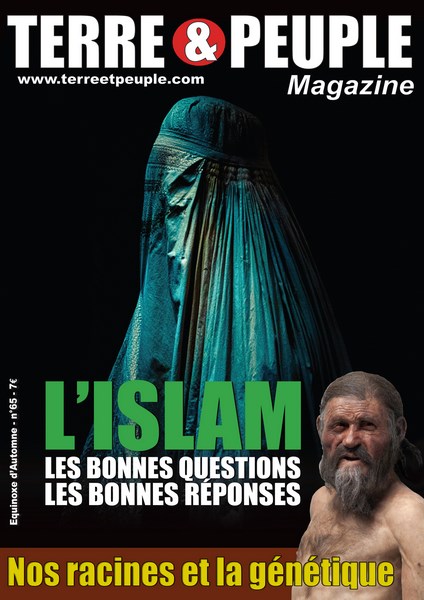 Europe has taken a big step towards suicide, a century ago; in 1914-1918, the best European blood had been ruined in a monstrous haemorrhage. Then, those who want the death of Europe did it again in 1939-1945, hoping to give the coup de grâce. However, there was still a little of vitality among Europeans. It is this ultimate breath of life that is now threatened in a Europe taken by madness, poisoned by lies and open its door to all winds, greeting all this misery of the world that even a Michel Rocard advised to leave outside of the House of Europe.

The apocalyptic picture outline by Jean Raspail in the camp of saints (1973) – and that some nice spirits had accused him of doom mongering is becoming reality under our eyes. This is one of the good things regarding technological development: nobody can say that he is still not aware because, every night, viewers have under their eyes images that speak more than any long speeches (even if, of course, these images are filtered, selected, channelled, to avoid showing too harsh reality, too disturbing, too dangerous because that could trigger a rejection reflex, rejection among Europeans – rejection shown by a survey conducted by ELABE for BMFTV on September 2nd, which indicate that 56% of the French declare themselves hostile about the installation of migrants in France, percentage reaching 7.1% among workers).

The professional mourners never stop moaning about the fate of “migrants” (it is now the name given to the invaders), which require – yes, require – to be installed in Europe. Because, we are told, they come from countries where there is war. But whose fault is it? Michel Onfray masterfully slammed the face of the actor Bernard-Henri Lévy, prancing in front of the cameras to give moral lessons to Europeans who cannot accept quickly enough the unacceptable. “He is not ashamed…” said Onfray. And, citing the famous maxim of Michel Audiard (“Idiots are audacious, this is how we recognize them”), he recalled some evidence. Why did we get there? Because “we are collecting what was spread”. Lévy – and others, but he is emblematic – is “responsible and guilty” of what happens because, in inciting Sarkozy to bomb Libya and eliminate Gaddafi yesterday, as he does today with Hollande towards the Syria of Assad, he switch on the wick of a powder barrel so that he would explode in our face today. Libya, plunged into anarchy, has become a sieve through which rush into those who came from deepest Africa, and are desperate to enjoy the European cow milk. In Syria, people who are fleeing to country are also eager to take advantage of the gullibility of well conditioned Europeans, blamed by the opinion makers to let people in, people whose we are told, without laughing, that they are an asset to their hosts.

Politicians, as always in front of an obstacle, argue endlessly. How to pass the hot potato to the neighbour? It is, behind their declarations “humanitarian”, open-handed, the questions that are facing leaders of Europeans countries, all more hypocrite than each other. Hollande, and Merkel, who are desperately trying to show that they are the conscience of Europe, want to male people forget about their invalidity in organizing a distribution of migrants through quotas. And Merkel calls on “European values”. What values? Those which consist in accepting and even advocating, the Big Replacement? But in fact, the Eurocrats are afraid. Scared to see Europeans people to wake up.

Timmermans, vice-president of the European Commission, says: “If we fail, it will open the door to populism”.

Problem: some European countries do not intend to force themselves in accepting a “gift” they do not want. The Czech Republic, Slovakia and Hungary have announced they reject “any idea of quotas fix by the Union for the reception of migrants”. Vaclav Klaus, who was the President of the Czech Republic from 2003 to 2013, has launched a petition against immigration, calling the government of his country “to ensure the inviolability of the border” and “to reject quotas” distribution of migrant advocated by the Europeans Commission. He adds: “We are opposing to the manipulation of public opinion by creating a false sense of solidarity with the migrants”. And he warned against: “Mass immigration represents a fundamental threat to the stability of Europe and members of European Union countries” due to “risks of an artificial mixture of nations, disparate culture and religions”. He concludes: “ Europe is committing suicide”. And he denounced Fabius, who dares criticize the Hungarian that refuse the invasion of their country. At the same time, the pope asks every Catholic family to let entering, in their home, migrants. These two personify what we are fighting.